History of the Charity 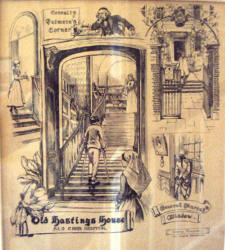 The origins of the Magdalen and Lasher Charity go back to 1294, when Petronella de Cham donated over 5 acres of farmland (known as the Maudlin Lands) lying mostly to the west of the present day Bohemia Road to support the Hospital of St Mary Magdalen; a leper and pest house for the tending and relief of sick people. During the reign of Henry VIII the Hospital and Chantry of St Margaret were merged and seized including Petronella’s five acres. It wasn’t until 1589 that Queen Elizabeth returned control of the estate to the Mayor and Jurats of the Hastings Corporation. Sadly the hospital had, by this time, ceased to exist as records describe the newly returned estate as a house, barn and farm lands and that it was occupied by several tenants.

In 1601, with the introduction of the Poor Rate, the Hastings Corporation decided that the rents from these tenants (amounting to £49 per annum) would be donated to the Churchwardens of St Clements and All Saints to help them raise the Poor Rate required of each Parish.

It was about this time that Mr Thomas Lasher, who lived at Brenchley in Kent, purchased about 16 acres of land in the Parish of All Saints and, in 1691, made a Will asking that the rent received for the land should be spent on the seven poorest inhabitants of the Town and Port of Hastings. It was the duty of the Mayor and Hastings Corporation to choose the most appropriate beneficiaries.

It is clear at this point then that both the Magdalen and Lasher Charities had very similar aims.

In 1837 the Municipal Corporation Act became law and lands such as Thomas Lasher’s and the Magdalen (Maudlin) Lands were placed under the independent control of thirteen trustees; henceforth known as the “Trustees of the Magdalen and Lasher Charity”.

By this time Hastings was being transformed from a small fishing port located in the Bourne Valley to a large, prosperous and rapidly expanding seaside resort. The previously low value agricultural land was becoming high value development land. In 1847, for example, the “Trustees of the Magdalen and Lasher Charity” sold to the South Eastern Railway Company the site on which to build Warrior Square station for the princely sum of £1,671.

The potential for charitable activity was being greatly increased, but so also was the potential for encroachment, mismanagement and misappropriation. The Charity Commission intervened and in 1877/78 it increased the number of Trustees to 15 and approved a fresh scheme dividing the charity into three main sections:-

The Magdalen and Lasher Charity as we know it today was officially created.